codequest has experience in building native mobile apps for industries such as health, sports & fitness, fintech and real estate. Check out our technologies below. 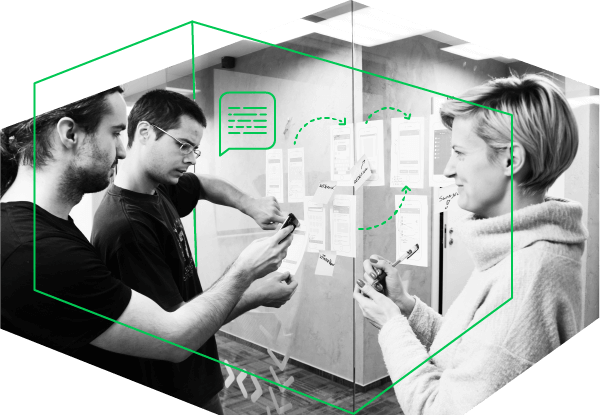 We specialize in native iOS and Android app development. When it comes to building great and performant apps there are no shortcuts: development in Swift for iOS and Java or Kotlin for Android is the most obvious and solid options.

For simpler projects we also offer development in React Native: this approach allows us to save time, developing for iOS and Android in the same application and framework.

As an iOS development company, we focus on providing the best possible solution to the problem. When it comes to most apps this solution is native development and the most optimal language for iOS is called Swift.

With an app developed in Swift you have the guarantee that it will be performant and smooth to use, that the designs will be up to date with the latest standards in Apple’s App Store and that it will work across different Apple devices without any problem.

Swift is also the best tool to develop applications for iPad and Apple Watch, making it possible for a multi-platform experience of your iOS application.

React Native is a JavaScript framework that allows for cross-platform mobile development using one codebase and one technology across multiple platforms. In this scenario one or multiple JavaScript developers can create an application that works for both iOS and Android, rather than building it using developers in multiple technologies.

Development in React Native is getting popular because it is robust while it uses much less development resources than writing two separate native apps for iOS and Android. Parts of the React Native code can also be reused for a potential web version of your product.

This technology has been developed by Facebook, which makes it a trustworthy and solid hybrid option.

We develop native Android Applications in Java or Kotlin. Both languages are officially supported by Google, which makes them the best tools for the job.

As Android is becoming more and more popular, especially in certain regions of the World and with almost 85% of all new smartphones being powered by Google’s OS Android Development of your app is becoming a necessity.

Our Android team is ready to take on your app as their next challenge.

While new technologies and languages are essential to create great apps, a product would not be robust without a system to verify the quality of the work, and an approach that allows us to build exactly what the client wants. Here are some of the most important solutions that help us deliver what we promise.

An app doesn’t only have to look good, it has to be intuitive and easy to use. That’s why we put great emphasis on the Discovery Phase, where we turn concept into a set of mockups and the set of mockups into a beautiful and functional design.

Native or Hybrid? The answer might be difficult at first glance. The fact is that native development is still the most robust way to proceed, which doesn’t mean React Native development is better in some scenarios. We always advise to use the best solution.

It is crucial that the final application works smoothly across multiple devices and models. Having dedicated testers outside of the immediate development team that hard-test the app on different devices and extreme scenarios ensures that the final result is a bug-free release.

To assure you that the development is going forward we try to deliver you something that you can test and experience with each development sprint. We use tools such as Bitrise.io to demo you new features with each iteration.

Need a free estimate for your mobile app?

Write us today to discuss scope, timeframe and budget for your next project!